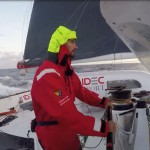 It looks like another sluggish day for Joyon and his troops, who are doing their utmost to make the most of the fifteen knots or so of wind in this area. They have crossed the latitude of 45 degrees south, but Francis aims to go even further down to around 51 or 52 degrees to get around an area of low pressure developing around Madagascar. IDEC SPORT is sailing down with the ice, with the risk of encountering icebergs and growlers. The atmosphere on board the boat is changing with the need to take this parameter into account.

At the Cape of Good Hope tomorrow

“The ridge of high pressure is moving along with us and so we are being slowed down.” With his legendary calm, Francis Joyon is accepting this punishment from the elements. “We weren’t able to stay ahead of the front, which could have taken us all the way to the Cape of Good Hope. This low is moving eastwards at more than 35 knots and overtook us. The lads kept hard at it, but we had to gybe behind the front. Since then, we have had to suffer light winds and our speed has dropped right off.” At just over twenty knots heading towards the south-east, the big, red trimaran is not hanging around, but is between 350 and 380 miles off the record pace for the Jules Verne Trophy. Joyon and his crew of five are therefore only likely to enter the Indian Ocean after passing the Cape of Good Hope and Cape Agulhas on Saturday morning.

Two worries are currently occupying the minds of the men on board. How will they deal with the Indian Ocean, which after the South Atlantic appears to like to complicate matters on this record route, forcing IDEC SPORT to go a long way south to get around the low developing around Madagascar. And then, there is the presence of the ice. “It would be the end of the record attempt, if we attempted to go through this low,” explained Marcel van Triest. “Rounding it via the north would extend the voyage and we wouldn’t be certain of gaining any time. So, we have to go underneath it and play around in the ice zone.”

Ice is the word on everyone’s lips. The whole crew mentions it in their discussions, but also talk about it with Marcel van Triest, who regularly receives satellite photos and observations to keep up to date allowing him to pinpoint the icebergs, which have broken off from the Antarctic. They have to keep an eye out for growlers though, as these blocks of ice are just under the surface and cannot be seen on the satellite photos. They can be extremely dangerous for any boat advancing at high speed. “The radar is on all the time,” added Francis, “and we’re watching the drop in the temperature of the water around us, which is currently around five degrees, while peering at what lies ahead of us.” This task has been all the more complicated today because of the persistent mist, which has considerably reduced the visibility.

The Jules Verne Trophy is certainly living up to its reputation as an adventure on this 13th day of racing. Francis Joyon, Alex Pella, Clément Surtel, Bernard Stamm, Gwénolé Gahinet and Boris Herrmann wish to remain focused on getting the boat moving, while keenly looking ahead to entering the Indian Ocean. “There’s a great atmosphere on board,” declared Boris Herrmann. “Bernard Stamm has done a great job with the supplies. He has wisely prepared everything so we get more calories as we get into the Southern Ocean and the colder climes. We’re eating well and sleeping better than in the Tropics. We chat a lot and the boat is magical.” The only thing that is missing for the moment is crossing the longitude of the Cape of Good Hope, not because of the time, but quite simply because Boris will pass around his little flask of whisky that he plans to open at each of the major capes, Good Hope, Leeuwin and the Horn…