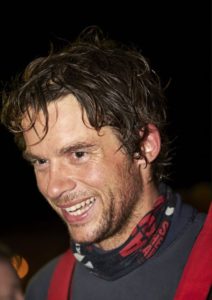 When he crossed the finish line in Pointe-à-Pitre at 0023hrs UTC last night, Paul Meilhat won the the Route du Rhum in the IMOCA category, taking into account the 24-hour penalty given to Alex Thomson for starting his engine after running aground. Paul’s win remains an incredible achievement aboard a boat (SMA) that was launched eight years ago and is still fitted with straight daggerboards. Two hours and fifteen minutes after the winner, Yann Eliès took second place. As we write this, Vincent Riou and Boris Herrmann are sailing around Guadeloupe. In our final feature on the race in the IMOCA class, we hear from Gwénolé Gahinet, a big friend of Paul Meilhat with whom he has often sailed on SMA and in the Figaro class.

“I’m delighted for Paul. He had a magnificent race. He really got the most out of his boat. It was not easy, because as soon as they left the English Channel, the reaching conditions favoured the foilers. But Paul managed to play his cards right in the first low-pressure system. Then, he succeeded in keeping up with the pace set by Yann Eliès and Vincent Riou, who were sailing on IMOCAs with foils. He achieved all that with a boat launched eight years ago.

“In the Route du Rhum, having a real sense of the sea is vital”

Because they set off in November, the Route du Rhum is extremely difficult, but that is also what makes this race so special. The conditions can be tricky, but you have to take risks, as it is a short race. These risks need to be measured and you need to know how hard to push. In the Route du Rhum, having a real sense of the sea is vital. Paul Meilhat clearly has that.

He felt perfectly at one with his boat. He said before the start that he loved his SMA. Yet, it’s never easy to feel good aboard an IMOCA. It’s all the more exciting when things work out. You need to spend a lot of time at sea with your boat and take part in a lot of long races to appreciate that. Based on my understanding, Paul is really hooked on it.
Paul Meilhat, just like Yann Eliès in fact, is looking for sponsors for the 2020 Vendée Globe. Given that, he knew that the best thing to do was to win the race and that certainly motivated him. Paul and Yann should not have any regrets and should be able to move onto the next chapter.”

Hats off to Paul’s rivals, who put up a good fight. They gave it their all keeping up a pace similar to the Solitaire du Figaro. I’m impressed. Alex Thomson has an incredible race by taking more risks. That is what in fact caused his accident. He placed the bar very high and wore himself out by the finish. Alex had a fantastic reaction after his penalty was announced and was very classy.

Looking around the Route du Rhum website, I found a chart detailing the penalties. In that document, it is clearly stated that in such circumstances the penalty should be 24 hours. So, the punishment fits in with what is stipulated in the rules. But at the same time, it is hard as in the Route du Rhum, stopovers are allowed. In the case of a pit stop, you can use your engine without getting a penalty… Some work needs to be done to make the rules clearer about stopovers and removing the engine seal, so that the general public can better understand what is happening in our sport.

“When you have confidence in your boat and yourself, you can prove the forecasts wrong”

Paul Meilhat’s win was always a possibility, but it wasn’t the most likely outcome. I have been watching this race closely, in particular following Francis Joyon on IDEC Sport in the Ultime category. It’s funny because these projects are in some ways similar. In both cases, the odds were not in their favour and yet they won. When you really believe and have confidence in your boat and yourself, you can prove the forecasts wrong. In a race like this year’s, it is the sailors that make all the difference. We must not forget that the more recent boats have not been completely set up, and in some cases the skippers have not had enough time to train on their boats.

“A great message about the value of perseverance”

I also know Boris Herrmann well having sailed around the world with him on IDEC Sport. This was his first major solo race on an IMOCA and he has had a great race, taking an intermediate route between Alex’s and that chosen by the group including Paul, Yann and Vincent. We wondered for a long time whether he would manage to get back with them. Getting around the high was quite tricky for Boris, and in the end he got back too far behind the four leaders.

Further back, there is a great battle raging between the 2008 generation boats skippered by Damien Seguin, Alan Roura and Stéphane Le Diraison. I can also see that two non-professional skippers, Erik Nigon and Ari Huusela, are still in the race. Finishing the Route du Rhum is already an achievement in itself. IMOCAs are hard boats to sail alone. It just takes one small mistake to have a huge problem. Finally, I would like to add that the sailors who carried out pit stops before setting off again offer us a great message about the value of perseverance.”