The French boat builder has set up, in partnership with ZF and Raymarine, a unique system that simplifies the docking of sailing boats above 44 feet. The 360 docking, controls the propulsion system with a joystick.

How does it work?
Docking a large sailing boat involves three elements: the wheel, the engine and the bowthruster. But this is not as simple as it seems when you have to consider the drift, windage, speed and momentum. The joystick transmits the commands to a control box which uses the Raymarine autopilot to lock the helm. Then, a simple movement of the joystick controls the orientation and the thrust of the pod, as well as the bowthruster. The pod, coupled with the engine and located behind the keel, can pivot 360° at great speed in order to move the boat while integrating all the various paramters (including the mechanical resistance of the keel and rudder). The most complex manoeuvres are then easily possible, such as making a full circle or S-shaped paths in very small spaces, in any sea or wind conditions.

As of today, all the new Jeanneau sailboats above 44 feet can be equipped with this system. 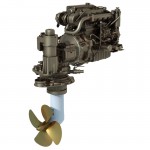 The range of  Jeanneau on NauticNews