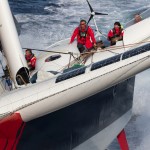 Right in the middle of the Atlantic Ocean, Francis Joyon and his men are giving it their all for this final battle, clocking up supersonic speeds. In four days, they are expected to cross the line off Ushant. But before that, they have some rough weather ahead…

To the left of the boat, there is Florida around 1600 miles away. To the right, the Canaries are around the same distance away. Right in the middle of the Atlantic at 27 degrees north, the big, red trimaran is still going full steam ahead. “We’re on a semi-circular route and that should bring us back to Brittany one day.” Francis Joyon has not lost his sense of humour on this 44th day in the attempt to smash the Jules Verne Trophy record. That tells us a lot about the spirit that reigns aboard IDEC SPORT with all six men still on the attack. While they have known for several days now that the round the world record cannot be beaten, they are nevertheless keen to achieve some other successes along the way. Why not got the boat’s record on this North Atlantic stretch, for example? “And then there’s that other boat ahead of us (Spindrift) that we would like to catch,” explained Joyon.

Full speed ahead! It is as if the sailors on IDEC SPORT could not imagine anything else. “Last night, we went a bit wild, it’s true,” Francis told us when asked about the peak speeds in excess of 40 knots. “It’s true that it was a great night and the sea was smooth, so it didn’t require too much hard work. We were able to get up to high speeds without putting too much strain on the boat and without taking any risks.” Those few sailors, who have gone beyond 40 knots, will appreciate the extent of the feat.
So what now? In the coming hours, the idea is to complete the rounding on the western side of the high. Already since this morning, the speed towards the finish has doubled (20 knots instead of 10 knots of VMG), while the real speed on the water is still the same at around an average of 30 knots. What that means is that gradually IDEC SPORT is shifting her bearing towards the east. “Slowly but surely, we are taking advantage of the wind shift to turn towards the right,” confirmed Francis Joyon, before adding, “We had to go a very long way around, but in the coming hours, we shall be back on the direct route towards Brittany.”

Heavy weather for the final stretch

That’s the good news for the day. According to the latest estimates, they should be finishing sometime on Friday. Before that they are going to have to find a compromise between performance and a cautious approach, as IDEC SPORT has no option but to face the (very) heavy weather, which is currently affecting the North Atlantic, as a series of deep low-pressure areas sweeps across. “Yes, it’s going to be fairly violent,” Francis explained in his dulcet tones. “We can see 40-45 knots of wind on the charts, which will mean a tricky sea state. We’ll try to position ourselves well to deal with these lows, but in the end, there’s no escaping this heavy weather. At some point, we’re going to have to face it in order to get back towards Brittany.” That is the main hurdle that lies ahead in the next four days before they complete this fantastic adventure. The bows will once again be sending the spray flying with a mass of water in the air in their wake…