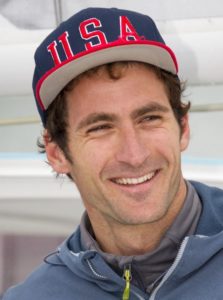 On Friday, eleven IMOCAs are continuing to race towards Guadeloupe. While Yannick Bestaven has unfortunately been forced to retire, Jérémie Beyou, Alexia Barrier, Fabrice Amedeo, Manuel Cousin and Romain Attanasio intend to set sail again after carrying out pit stops. At the front of the fleet, four skippers are sailing in the trade winds and are now battling it out to win this race. Unless there are some major upsets, Alex Thomson, Paul Meilhat, Vincent Riou and Yann Eliès are in contention for victory. Behind them, other battles are raging for places further down the rankings. Today, Morgan Lagravière gives us his expert analysis of the Route du Rhum in the IMOCA class.

“As we might have expected, Alex Thomson, Paul Meilhat, Vincent Riou and Yann Eliès have managed to weave their way to the south of the ridge of high pressure, which will block the path for those following them. The leaders are about to enter the real trade NE’ly winds and so will be making their getaway.

For the sailors who are furthest south, conditions on board their boats have markedly improved. They must be feeling a real sense of relief. But even in the trade winds, you need to keep your wits about you to avoid any incidents. The race can always come to an end as fast as you can snap your fingers. It just takes one case of rounding up or broaching. In terms of the race itself, there are still some important elements to deal with, and all four frontrunners will be piling the pressure on each other. They will be pushing their boats hard and right to their own personal limits. They really need to be careful, as the first part of the race has left its mark on the boats and the men.

“Paul Meilhat, far from being an outsider”

I’m not surprised at all about Paul Meilhat’s performance. Since the start of the Route du Rhum, the competitors have often been sailing in conditions tending to favour an IMOCA with straight daggerboards. There has been a lot of upwind sailing and for a short while now, the leaders have cranked up their VMG (a compromise between bearing and speed) sailing downwind. This is once again a configuration that is favourable for a boat with daggerboards. It’s somewhat surprising even that the IMOCAs with foils, particularly Alex’s which is not designed for upwind racing, have managed to do so well.

Paul knows the way, as he won the Transat AG2R on his Figaro (sailing between Concarneau in Brittany and Saint-Barth). He is also one of the IMOCA skippers who have sailed the most miles over the past few years. So it is quite normal that he has ended up in this position. He is well placed to do well in the trade winds and win the Route du Rhum. Paul is far from being an outsider. Everything still remains wide open and hopes remain high for Alex Thomson, Vincent Riou and Yann Eliès.

The strategy for what lies ahead is going to be interesting to watch. The route to Pointe-à-Pitre has them with the wind directly astern, so they are going to have to plan their gybes. In general, the further south you are, the further you are from the influence of the high and the more stable the trade wind. Various routes are possible. To sum up, either they can choose to dive further south, which means sailing further, but in stronger trade winds. Or they can attempt to cut across higher up, but where there is not so much wind. The cogs in their heads must be whirring, as the leaders are going to have to take a decision shortly. It’s all about compromising.
Paul’s trajectory may well differ from the three competitors chasing him. Having a foil is not always a bonus. In some conditions, it acts as a brake more than anything. To be efficient and accelerate away, the foilers have to have a wider angle to their trajectory. It’s a matter of determining whether the gain in speed can compensate for the longer route… That will largely depend on the strength of the trade wind. If the wind strengthens a lot, the IMOCAs with foils will be able to fly and will be in with a good chance. It’s very interesting, as each boat is different and they don’t have the same ideal performance range. So, each sailor will have to decide how to sail with what they have at their disposal, while taking into account the technical specifics of their boat.

“If you’re still in the race, it’s already an achievement”

Further back, Boris Herrmann attempted a bold option, but I can’t see how he can benefit from it, as the ridge of high pressure is blocking his path and is wider out west. I can’t see any alternative for him. Having said that, he is still racing, which is already quite an achievement. Lots of very good sailors have had to stop and those who withstood such tough conditions deserve our respect, whether they are first or last.

A nice little group has formed with Stéphane Le Diraison, Alan Roura, Damien Seguin and Arnaud Boissières. The leaders in this group will shortly run into the ridge of high pressure and slow down, which should allow Arnaud to narrow the gap. They will probably be all bunched up together when they pick up the trade winds. This is going to be a great contest to watch further back in the race. For them, it must be quite stimulating to be sailing so close together. Being near other boats is reassuring and allows you to push harder. They are clocking up useful experience and enjoying themselves. And they are fighting it out for fifth place in the Route du Rhum, which is quite something in any case. They are having a fine race.

“The variety within the IMOCA class is one of its strengths”

I’m also watching Erik Nigon and Ari Huusela. I don’t know them personally, but I can see that for rookies in the IMOCA class, they are certainly putting on a good show. This first solo transatlantic race will probably be something that stays with them. The variety of backgrounds, racing careers and generations is one of the strong features of the IMOCA class. The competitors may not have the same standard out on the water, but they are each involved in their own race and have a great story to tell. That variety is one of its strengths.”