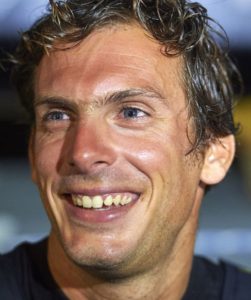 With the final outcome being decided in the Ultime category tonight, the leading IMOCAs are about to cross the halfway point in the Route du Rhum. Alex Thomson, Paul Meilhat, Vincent Riou and Yann Eliès may finish in Pointe-à-Pitre before next weekend. The battle is raging and while the British sailor will be difficult to beat, everything is still to play for. With Fabrice Amedeo setting sail again after his pit stop, there are now twelve IMOCAs on their way towards Guadeloupe. However, Isabelle Joschke has unfortunately officially announced her retirement. Today (Sunday), Charlie Dalin offers us his expert analysis and gives us his personal take on the Route du Rhum in the IMOCA class.

“The first four are today the only ones sailing downwind to the south of the high. It looks like they are experiencing lots of squalls. We can see that in their videos and in the satellite images, but also if we look at their trajectories, which are not very even. As is often the case, the trade winds seem irregular in strength and direction. Alex, Paul, Vincent and Yann have lots of work to do aboard. This is far from smooth sailing. They have to keep changing their trajectory and have to keep trimming.

“Finding the perfect compromise between the spinnaker and gennaker”

It’s not that simple, as they are sailing in wind strengths, where on paper they could be using the spinnaker, but where they could make do with the gennaker, if they luff up a little. They have to find the perfect compromise between those two. The spinnaker is a vital sail, which allows you to sail fairly low and reduce the number of changes of tack. But it is also a fragile sail, which is fairly easy to tear. When you are under spinnaker in an IMOCA, you have to spend a lot of time at the helm to ride the surf and get the boat moving again. Under gennaker, the boat doesn’t slow down and stays on track and the autopilot does its job. You can be fast, while enjoying some rest. But the angle is tighter. In the coming days, the trade winds are going to strengthen and I think that the leaders will no longer be asking that question and will sail under gennaker, as when the wind gets above 22 knots, you furl up the spinnaker.

“Alex Thomson is ideally placed for what lies ahead”

Alex Thomson is often quicker than those chasing him. Hugo Boss really accelerates away while keeping an angle away from the wind. Alex is ideally placed for what lies ahead. Between now and the finish in Guadeloupe, the wind will swing around between 30 and 40 degrees towards the right. Alex is well placed for that wind shift. Even if in theory, he is making the most of lighter and more irregular winds than his rivals further south, it is going to be hard to overtake him. He appears to have the situation under control. He will be trying to maintain his position and gybe at the same time as the others. The first boats are due to finish between 15th and 16th November. So, they have four or five days of sailing left and the battle will continue to rage.

“The first 48 hours of a race are key, even when you are talking about a transatlantic race”

Once again, we saw that the first 48 hours of racing were key. That is the case even when we are talking about a transatlantic race, as those in front often make their getaway. The low–pressure area they experienced on the first night really sorted them out. Paul Meilhat dealt perfectly with this first hurdle and today, he is up there among the frontrunners. Paul has sailed really well since the start. His boat is a good all-rounder, which seems to be useful in the Route du Rhum. It’s really surprising that Vincent Riou, in conditions where on paper he was faster than Paul, got left behind. We’ll have to wait until the finish for him to reveal what was going on. Either he has broken something, or he had to slow down to carry out repairs and has now regained his full potential. For the rest of the race, there won’t be any reaching (wind on the beam). The leaders are sailing in a point of sail, where it is harder to tell the difference between a foiler and non foiler.

“Boris Herrmann made the right choice”

Seeing that he was positioned way off to the west and the ridge of high pressure was expanding, Boris Herrmann’s way through to the trade winds was blocked off. Even if psychologically, it wasn’t easy for him, he had no other real option but to tack back up to the NW and sail upwind in strong winds. If he had continued towards the south, he would have run into the wall. He made the right choice. Shortly, he should find himself on the correct side of the high and will get back in line behind the four frontrunners, but in front of the boats off to the east. Boris is doing well in his first solo transatlantic race. According to my route planner, I see him finishing a little under 24 hours after the first group.

For the group further east, the door slammed in their face after Yann Eliès made it through. The group led by Stéphane Le Diraison and Alan Roura have been battling it out in the ridge of high pressure since the latitude of Madeira. Stéphane and Alan are still north of the ridge of high pressure and have yet to reach the “windward mark.” They are a long way back now in comparison to the leaders and the gap will continue to widen. But gradually, the ridge will shrink away and this evening they should pick up a 15-20 knot northerly wind and their speed should climb.

The competitors who stopped to carry out repairs are gradually setting off again. It can’t be easy getting back in a race so far behind the others. But those who are able to do so are right to be setting sail again. The Route du Rhum is the most important race of the year in the IMOCA circuit. They will be able to make the most of some fine days of downwind sailing. On these boats, it is vital to clock up the miles. Sailing out at sea for a long time is the best way to get to grips with an IMOCA.”