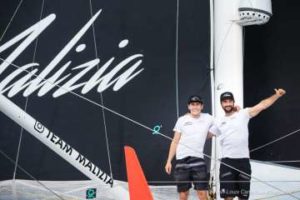 After arriving in the Bay of All Saints on Monday morning to complete his first transatlantic, Britain’s Will Harris, 25, recounted the moment he heard the boat alongside them in the middle of the North Atlantic – Hugo Boss – had hit something and lost their keel.

“I remember when we got the news that Hugo Boss’s keel was hanging by a thread,” Harris, who was co-skipper to Boris Hermann on Malizia II – Yacht Club de Monaco, which finished twelfth after a surging comeback, said. “When you’re that close it makes it feels more real and it makes you understand the risks. Ten miles further east and that could have been us. It was really bad luck for them.”

With the pontoons around the Terminal Turistico Nautico da Bahia in Salvador already full of boats and with so many finishers arriving in the bright sunshine and the tranquil waters of one of the biggest bays in the world, it is to forget how hard this race is, the near misses and those who have not made it here. The 14th edition of the Transat Jacques Vabre Normandie Le Havre has been a lower wind race than in the past, but that does not make everything avoidable.

“As soon as we heard the news we were suddenly more alert. But things like that are impossible to anticipate. Whatever they hit, a partially submerged container…it’s not something you can avoid.

“The worst-case scenario is that you’re on the bow making a sail change and you go overboard. So, after that you make sure you’re always wearing a life jacket and clipping on. You can be a good sailor but if something like that is going to happen there is not always a lot you can do.”

“So, yes, super happy to finally arrive here in Salvador, long time on the water and a tricky race for us, but it was still really good to come back into the mix towards the Doldrums.”

For the 38-year-old German skipper, Herrmann, who knows Alex Thomson, the skipper of Hugo Boss, well there was sympathy and understanding. All the skippers have different priorities, but getting their boats to the destination is usually number one.

“We sympathise with Alex,” Herrmann said. “What did we did notice is that it was on the Great Circle route from Panama to Gibraltar. So, there are going to be more boats on the a shipping route, so stuff floating around – like a container – is more likely on a big shipping highway.

“It was good to hear their boat is already on its way back home – via the Cape Verde islands. When we heard the news, we wrote to Alex straight away and he wrote back and sounded positive and relaxed. We can’t do anything about partially submerged objects.”

IMOCA: 13 boats finished – but penalties overturn leaderboard
Thirteen IMOCA have joined the three Multi50 on the pontoons and the other half of the IMOCA fleet will stream in over the next few days in what have been closely fought battles between these boats of different generations stretching back over 20 years. After sailing around 5,000 miles, this has been a finish measured in minutes for all of the boats, with everyone bar the winner Apivia chasing or being chased.

But even on the pontoons the results can change. Bureau Vallée, received a penalty of 1 hour and 30 minutes for breaking an engine seal, and so has been downgraded from eighth to tenth place after apparently winning a hard-fought three-way battle overnight.

Meanwhile, Advens for Cybersecurity, forgot to round the last mark of the race at the entrance to the Bay of All Saints. The international jury will meet on Tuesday to decide the penalty they will receive, but given the very small gap with America’s 11th Hour Racing (less than 15 minutes) in fifth, Thomas Ruyant and Antoine Koch could lose their fourth place.

As a reminder, PRB, 11th Hour Racing and Newrest Art & Fenêtres were also penalised by 1 hour and 30 minutes for breaking engine seals, but had made their penalty turns during the race.

Britain’s Samantha Davies and French co-skipper, Paul Meilhat, on their 60ft monohull, Initiatives-Cœur, have finished seventh in the IMOCA class of the 14th edition of the Transat Jacques Vabre Normandie Le Havre after crossing the finish line in the Bay of All Saints in Salvador de Bahia, Brazil on Sunday, November 10, 2019 at 21:45:44 (UTC), 14 days, 9 hours 30 minutes and 44 seconds after leaving Le Havre, Normandy, France on Sunday, October 27 at 12:15 (UTC).

Boris Herrmann and Will Harris, on their 60ft monohull, Malizia II – Yacht Club de Monaco, have finished twelfth in the IMOCA class of the 14th edition of the Transat Jacques Vabre Normandie Le Havre after crossing the finish line in the Bay of All Saints in Salvador de Bahia, Brazil on Monday, November 11, 2019 at 10:43:43 (UTC), 14 days, 22 hours 28 minutes and 43 seconds after leaving Le Havre, Normandy, France on Sunday, October 27 at 12:15 (UTC).

Class40
If the routing is to be believed all the action will be behind the podium in the edition. In 2017, the leading three were locked together along the coast of Brazil and Aïna Enfance & Avenir were pushed into second place by just 17 minutes.

At the 15:00 ranking, Britain’s Sam Goodchild on Leyton, has not been able to make an impression on the leader Crédit Mutuel who with 610 miles to the finish had extended the lead to 65 miles. Leyton though has retained a 73-mile lead over Aïna Enfance & Avenir as they head towards Recife on the northeast coast of Brazil.

It is not quite the conditions they were expecting with the southerly wind making it more of a wet upwind struggle. “We have 20-25 knots, it’s very wet sailing. The podium is set but we must stay focused, studious and leave nothing to chance,” Ian Lipinski, the skipper of Crédit Mutuel said. “The problem is that the trade wind seems to be very southerly and we’re not going to open to open up much.”

Behind them four boast are scrapping. Crosscall Chamonix Mont Blanc, Made in Midi, Linkt and Banque du Léman are just 34 miles apart, with more than 70 miles of lateral separation, which could be the key figure, especially if the wind is not very generous at the end of the course.

Meanwhile, in the northern hemisphere, Terre Exotique, one of the first Class40 ever launched, in 2004, is still 1,672 miles away from Salvador de Bahia.