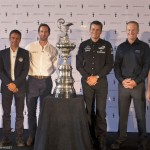 The top six sailing teams in the world will converge in Muscat, Oman, at the end of the month for the first of six Louis Vuitton America’s Cup World Series events this year.

The staggering speeds of the one-design AC45 foiling catamarans that will race in the Louis Vuitton America’s Cup World Series Oman are set to electrify the Muscat crowds and challenge the crews who will turn their attention to racing for the first time since the last event in Bermuda in October.

This Kiwi crew looks very different from the one that was defeated at the last America’s Cup in San Francisco in 2013 by ORACLE TEAM USA, with Peter Burling taking over as helmsman and Glenn Ashby, one of the most knowledgeable and respected foiling experts in the world, leading the team as skipper.

The current America’s Cup champion, ORACLE TEAM USA, sit ten points behind in second place, a position two-time Cup winning skipper Jimmy Spithill will be looking to overhaul when racing kicks off in Oman on February 27.

“Everyone wants to start this first event of the year off well,” Spithill said. “We want to kick it off with a win. But every single team has been out training since the last event, so it won’t be easy. It’s an awesome venue and we’re looking forward to it.”

Sir Ben Ainslie’s British crew Land Rover BAR have been training hard on their AC45 test boats in the Solent in Britain but the Gulf of Oman is almost as familiar to them with several of the crew, including Ainslie himself, having competed in the Extreme Sailing Series which kicks off each year in Muscat.

Artemis Racing, the Swedish team based out of Gothenburg, is led by Australian skipper Nathan Outteridge who in August will find himself locking horns with Emirates Team New Zealand’s Peter Burling in the 49er class at the 2016 Olympics. Artemis Racing is coming off an impressive win in the Bermuda event last year.

With the America’s Cup and the Olympics to contend with, the pressures on both Burling and Outteridge are considerable in 2016, while Groupama Team France skipper Franck Cammas is fighting his own battles after sustaining an injury while training in December which ended his Olympic campaign and may also keep him out of Louis Vuitton America’s Cup World Series Oman. The team is expected to announce whether Cammas will sail, and his possible replacement, in the coming days.

Softbank Team Japan, skippered by Dean Barker, the former stalwart of the Kiwi team, have high expectations for 2016 having completed some intensive training in Bermuda. They also welcomed two new Japanese crew Yugo Yoshida and Yuki Kasatani to the team, both super hungry for success and raring to go.

The six teams are scheduled to compete in six races over two days with all the action from Oman broadcast far and wide around the world.