Francis Joyon and the IDEC SPORT maxi trimaran crossed the longitude of the Cape of Good Hope, often referred to as the Cape of Storms, this morning at 0454hrs UTC, after 14 days, 19 hours and 48 minutes of sailing. He was 2 days, 19 hours and 51 minutes ahead of the time he set in 2009 on his first attempt at the Mauritius Route, the start of the route to the Indies, between Port Louis (Brittany) and Port Louis (Mauritius). This time was not the main goal for Joyon, for whom the Cape is a mere waypoint on a route that continues for another 2200 miles. The Cape of Storms earned its nickname because of the hellish weather conditions that can often be found in this part of the world. Far from resting on his laurels, Francis is now more than ever focused on keeping his maxi trimaran in this powerful corridor of wind offering him high speeds, while avoiding the tricky Agulhas Current, which is one of the most dangerous in the world, as it flows in the opposite direction to the winds.

Just like in major records
“I fought hard for this just as during major record attempts,” explained Francis as he passed away from the longitude of the Cape of Good Hope. “This was a good time, particularly seeing the start took place with a weather opportunity that was far from being ideal, but we wanted to make the most of in order to stick to our ambitious schedule in the Idec Sport Asian Tour, which will take us all the way to Hong Kong.” With his usual modesty, Francis Joyon does not touch on what he had to do to achieve this performance. We can see how hard it was when we look at the performance level the skipper of IDEC SPORT is currently achieving. In order to round the St. Helena high, Joyon was forced to sail a long way west of the direct route during his second week of racing, extending the distance by more than 1600 miles. Once he had managed to hop onto the front of a powerful low-pressure system moving away from the coast of Argentina, Francis lived up to his reputation, clocking up more than 700 miles or more a day, in spite of some horrendous seas with 20-foot high waves and averaging more than 27 knots.

A hellish pace in an extremely hostile environment
The pace he has maintained in the hellish conditions typical of the Southern Ocean has surprised even the most loyal observers. Among them, Christian Dumard, Francis’s weather consultant back on dry land, who could not hide his admiration this morning: “We cannot imagine what Francis is going through down in those latitudes. Maybe if we look at the stormy conditions at the tip of Brittany and in the English Channel, we can get a better idea of what Francis is having to deal with aboard his high-speed maxi-multihull.”

The Agulhas Current comes up against the strong westerly winds
The skipper admitted that “the Cape of Good Hope is just a longitude on the map.” The hard work does not stop when that virtual line is crossed. With a series of perfectly timed gybes, Joyon has managed not only to position IDEC SPORT in a strong air stream with decent winds and a good angle, but has also managed to avoid the tarrying Agulhas current, which comes down from Mozambique at around 5 knots and which comes up against the prevailing westerlies, generating nasty seas, and occasionally what are referred to as rogue waves, which appear out of nowhere… This is certainly a tricky exercise dealing with contrary currents, winds in excess of thirty knots and waves that are higher than 30 feet off to his south.
Having sailed almost 8500 miles averaging 23.5 knots out on the water, Francis has to keep up this mammoth task for another couple of days, before turning left and pointing his bows towards Mauritius. He will then have to deal with an area of high pressure and try to sail with the easterly wind on the beam towards the finish of this Mauritius Route with all its contrasts and dangers. 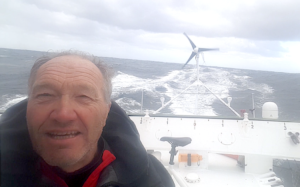 Francis Joyon’s reaction: “Seas that I have never experienced”
“I’m pleased with this time to the Cape of Good Hope, considering the weather we chose, which was far from being exceptional. We managed to weave our way down to the Cape Verde Islands and get through the Doldrums without getting held up. This was the first major hurdle we had to avoid tripping up at. I then pushed the boat as hard as possible in conditions that continued to strengthen. The low I have been hanging on to for the past four days is very violent with winds in excess of thirty knots all the time, but more importantly with violent gusts and very heavy seas, the like of which I have never seen. I had to do a lot of thinking to find the right settings and configuration to keep moving fast without punishing the boat, which was bouncing around all over the place. IDEC SPORT continues to surprise me. With one reef and the J1 sail, I can sail with the wind almost directly behind me and in seas that are slightly calmer, I am now back in more normal conditions. This very fast crossing of the South Atlantic was far from easy. I’m going to try to stick with this low for the next two days, while gradually heading further north. I’m trying to find my way through between the Agulhas Current and the very nasty seas further south. I think I’ll finish in around five days, so on around 8th November. I am not spending much time at the helm, as out on deck it is extremely tough, cold and wet. There aren’t many albatrosses to see in any case. My living conditions are stripped to the bare minimum. I haven’t really got any sleep at all over the past three nights, and it is only occasionally that I have managed to warm up some soup on my camping stove.”