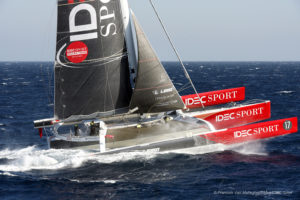 Francis Joyon is not one to hang around…He decided to go on stand-by from 18th October and he may well set sail now on Saturday 19th October to attempt to beat the Mauritius Route record.

Francis’s weather advisor and router, who will remain ashore, Christian Dumard tells us more about this favourable weather opportunity. “It is not ideal, but is nevertheless favourable and should allow him to reach the Equator in good downwind conditions. The wind will shift to the West and then NW, which should enable him to make a quick exit from the Bay of Biscay. After that, Francis will benefit from downwind sailing to the Doldrums and should fairly quickly pick up the trade winds. It is an opportunity worth grabbing.”

Francis Joyon knows all about this 8800-mile solo record between Port-Louis (Brittany) and Port-Louis (Mauritius). Around ten years ago, he opened up this route setting the first reference time for this course with all its weather hurdles. The skipper of IDEC SPORT will therefore be tackling his own record time.

27,000 miles of sailing ahead of the bows of IDEC SPORT
The Mauritius Route, the first Act in the IDEC SPORT ASIAN TOUR, a brand new campaign of record attempts covers almost 27,000 nautical miles (almost 50,000 km) or the equivalent of a long round the world voyage. The first Act will be followed by three other records, this time with a crew: