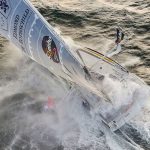 The French skipper Sébastien Josse, who lies in third place in the Vendée Globe, suffered serious damage to the port side foil of the IMOCA Edmond de Rothschild when he ploughed into the trough of a big wave this morning. He had been sailing on starboard gybe contending with difficult conditions, winds of 30-35kts and big, confused seas when the incident happened, some 900 miles to the SW of Cape Leeuwin.

Josse reported the damage to his team at 0930hrs UTC this morning and has subsequently put his racing priorities temporarily on hold in order to avoid the worst of the tropical low pressure system which was generated in the notorious area off Mozambique several days ago. The depression was forecasted to hold gusts of 50kts and seas up to ten metres high. He is in regular contact with his team and Race Direction. The safety of the skipper and the IMOCA 60 is his primary priority. He was expected to route to the south-east towards the centre of the low pressure system, seeking lighter winds as he looks to find a solution to his damage. The low pressure centre was forecast to be tracking close to the Antarctic Exclusion Zone. The damage to his port side foil is reported to have happened when the boat stopped suddenly and the appendage crashed downwards into the top of the housing, damaging the control system.

Romain Attanasio (Famille Mary-Etamine du Lys), 39, who was lying in 18thplace has been forced to alter course towards Cape Town after suffering damage to both of his rudders. Racing his first Vendée Globe aboard the historic evergreen Lombard design which started out as Catherine Chabaud’s Whirlpool and completed the last race as Initiatives Coeur in the hands of Tanguy de Lamotte, Attanasio has expressed his desire to carry out repairs in a sheltered area near Cape Town in accordance with the race’s no assistance rules, and aims to continue the race. Attanasio is reported to be in good health and when the incident happened was about 470 miles south of Cape Town where he is expected in around three to four days. “Romain is not giving up and is already feeling more positive. He will be doing his utmost to repair his boat and continue his adventures. I hope he will be encouraged by as many people as possible,” Sam Davies, Attanasio’s partner and team manager commented.

Armel Le Cléac’h smashed the race reference for the passage from Les Sables d’Olonne to Cape Leeuwin early this morning breaking the mark set by François Gabart in December 2012 by an incredible five days 14 hours and 26 minutes. Banque Populaire VIII skipper Le Cléach took just 28 days 20 hours and 12 minutes to reach the longitude of the SW corner of Australia. A certain symmetry with the 2012-13 race emerged when Briton Alex Thomson crossed the Cape Leeuwin longitude five hours and 16 minutes later in second place. Four years ago during the last edition Le Cléac’h was five hours and 49 minutes behind race winner Gabart. In 2012 Thomson – who went on to finish the race third – was also having a great race on the previous Hugo Boss and crossed Cape Leeuwin in third place one day and three hours behind Gabart.

Thomson has lost some miles to Le Cléac’h over the last 36 hours and is 110 miles behind on the 1400hrs Monday rankings. The top duo had been suffering with difficult, more moderate airs during yesterday, but are expecting to get the strong winds from the low which Josse is struggling with, although they have a better orientation relative to its path. Le Cléac’h admitted he did not know his exact elapsed time nor how much he had broken the record by when he spoke to Vendée LIVE today before revealing that he listens to comedy podcasts to relax from the constant stress. “It was nice to pass the second cape in the lead. It wasn’t really a key objective, but it’s great to be in front at one of the three major capes we have to pass,” he said. “Alex was first at the Cape of Good Hope a few hours ahead of me and this time it was the opposite. I haven’t studied the exact time, as I have been busy on Banque Populaire, but I think it was a good time. I don’t know what was up with Alex last night. He wasn’t very fast. Maybe he had a problem to deal with on his boat. We’re in a transition phase between two lows. Conditions are starting to change and the skies are clouding over. The wind is gradually strengthening. We just gybed as the wind shifted to the WNW. It’s going to get rougher in the next few hours. We’ll be entering the Pacific in just under a week, but the final week in the Indian is going to be complicated. It’s not going to be easy with the first deep low moving in this evening and then another one that will be with us south of New Zealand. Yesterday I had a lot of manoeuvres to do, but after that you enjoy a good meal and change your clothes. My little heater allows me to dry my clothes, which is good as after each manoeuvre we are soaked with the sea and with sweat. Then to relax I listen to some comedy podcasts.”

Japanese skipper Kojiro Shiraishi, who is heading to Cape Town after being forced to abandon due to a breakage to the top third of his mast on Spirit of Yukoh, was visibly touched by the messages of support when he spoke to Vendée LIVE today. Safran skipper Morgan Lagraviere, who also had to abandon, and got to know Shiraishi well when based at Roland Jourdain’s Kairos base, shared a typical sentiment. Shiraishi said: “As the first Japanese sailor to do the Vendée Globe, it was really an honour to be there at the start. It’s true that it is a disappointment not to complete this Vendée Globe. I have had lots of messages of support and would like to thank everyone.” Morgan Lagravière responded: “I’m glad to see you smiling as I know how hard it must have been for you not to finish this race. You have made us laugh so far and I’m sure you’ll continue to do that. I look forward to having a debriefing with you.”

They said
Kito de Pavant (Bastide Otio):
“Since the front went over yesterday morning, nothing has been going right aboard Bastide Otio. Firstly, I expected a strong westerly wind, but it didn’t come. It turned to the west, but only blew at between 15 and 20 knots until the middle of the night. As a consequence I didn’t have enough sail up and hot tossed around on the heavy seas. Impossible to find the right speed. Cautiously around midday I hoisted the small gennaker, ready to furl it, if the wind got up. At dusk, I furled itn although the wind was still very light. Then the wind finally appeared. 45 knots and the boat accelerated. 25 knots. Then she hit a huge wave and the speed went from 25 to zero in a few seconds. Inside, I could feel the stern rise up and the boat went over on her side with sails flapping. I rushed outside, but could not get the boat back up. There were some extremely powerful gusts. We stayed like that for a few long minutes… then the gennaker started to unfurl from the top… I thought I was heading for disaster… I finally managed to get the boat positioned with the wind from astern, but the time it took to sort the sails out, the damage had been done. The gennaker that I had spent so much time repairing was in shreds with bits of sail flapping in the wind.”

Jean-Pierre Dick, StMichel-Virbac:
“At the moment I have 35 knots of wind, which means I’m fairly quick. I’ll be going north of the Kerguelens this evening. It’s nice to see some land, but that does mean we have to remain alert. It’s tough at the moment. I get soaked every time I carry out a manoeuvre. I can’t wear gloves, so my hands are quickly cold. This morning to take in a reef, I spent an hour and a half or two hours out on deck. I was exhausted after that. After getting left behind early on, the goal is still the same – to make it to the podium. I’m trying to get back as much as I can. I’ve got my sights on Yann. Jérémie and Paul are a bit far away and the frontrunners seem to be beyond reach.”