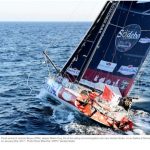 The 40-year old sailor who was forced out of the 2008-9 race and the 2012-13 race during the first weeks of both with different technical problems, completed the non-stop solo round the world race for the first time today after 78 days 6 hrs 38 mins and 40 seconds. Up with the leaders from the start on Sunday 6th November, Jérémie Beyou, who struggled with numerous technical difficulties this time, has shown his considerable skill, determination and stamina. Indeed British skipper Alex Thomson, who finished second, earlier today confirmed he often felt threatened by the talented French sailor who is one of the few skippers to have won La Solitaire du Figaro, the French annual summer solo offshore stage series. Beyou was always there ready to pounce behind the two frontrunners. He showed good all-round speed with his older, 2010 boat which was retro-fitted with foils. The Breton skipper achieved his goal by making it to third place and so all three top places in this race are taken by foil assisted VPLP-Verdier designs.

After winning the New York-Vendée transatlantic race last June Jérémie Beyou was tipped pre-start as a serious contender for a place on the podium in the 2016-2017 Vendée Globe. This boosted the confidence of of the skipper who won La Solitaire du Figaro in 2005, in 2011 and 2014. His resilience and tenacity, honed in Le Solitaire and hard galvanised by his two previous failures in the Vendée Globe equipped him to cope with all technical hitches he would experience in this race. Two of his autopilots failed early on and then his Fleet antenna stopped working depriving him of a means of communication and preventing him from getting regular weather updates. Jérémie Beyou had to dig deep to hang on to the frontrunners. His troubles continued periodically. “When my mainsail hook broke, I almost gave up. It was pitch black and I told myself I would never be able to repair it. Afterwards, I don’t know where I got the energy, but I managed to do it. Each decent manoeuvre is a victory and you have to be pleased about that.”

Around him in the in the group of leaders, attrition struck, several skippers were forced to retire: Vincent Riou (PRB) and Morgan Lagravière (Safran) as they reached the first cape, then Sébastien Josse (Edmond de Rothschild) and his long time rival and running mate Paul Meilhat (SMA) who he sailed alongside for hundreds of miles until he had to retire to Tahiti with keel ram problems. This meant that Maître CoQ found herself rather alone as the boat chasing Banque Populaire VIII and Hugo Boss in the Pacific, then on the way back up the Atlantic.

In spite of all the problems, Beyou has held on to the third place all the way to the finish and was never really under threat from the three skippers several hundred miles behind him (Jean-Pierre Dick, Yann Eliès and Jean le Cam). The skipper of Maître CoQ was fulsome when revealing his pleasure as he rounded Cape Horn for the first time on 27th December after 51 days of racing. Not only had Beyou started two previous Vendée Globes, but also had retired from the Barcelona World Race – the two handed round the world race, as well as an abandoned crewed attempt at the Jules Verne non stop record around the world: “I have set off in lots of round the world races with the Vendée Globe, the Jules Verne Trophy and the Barcelona World Race, but never before have I managed to get past the Horn, so it was about time.” The skipper, who like race winner Armel Le Cléac’h comes from Morlaix Bay, had to fight his way back up the Atlantic dealing with extremely variable winds and frustrating calms. “I am taking it one step at a time, one day after another, as each day spent on the water is another one gained. I am advancing like that, without thinking too far ahead,” regretted the skipper, who was treated badly by the wind gods, as he made his way through the final stretch to the finish line off Les Sables d’Olonne.

Jérémie Beyou, the third skipper to reach Les Sables d’Olonne sailed 27,101 nm at an average speed of 14.43 knots. His best average was 21 knots having sailed 504 miles in 24 hours on 21st November.

The top three finishers in this edition of the non-stop solo round the world race, have made ten attempts at the Vendée Globe. Armel Le Cléac’h has finished three from three, won one second twice, Alex Thomson started four, one second one third, abandoned twice. And Beyou has started three, one third place.

This VPLP Verdier designed boat from 2010 was previously sailed by Armel Le Cléac’h, who took her to second place in the 2012-2013 Vendée Globe. Four months of work were carried out on her in early 2016 with a New Zealand team to retrofit her with foils.