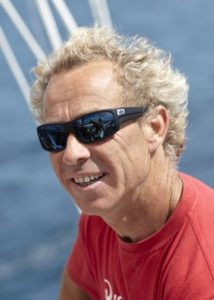 After Francis Joyon’s victory in the Ultime category, the battle between the IMOCAs is in the spotlight. For behind Alex Thomson, the clear leader, Paul Meilhat, Vincent Riou and Yann Eliès have shown once again that in the Route du Rhum absolutely nothing is certain until the finish line is crossed.

On Monday, three competitors, who were in for pit stops (Jérémie Beyou, Manuel Cousin and Romain Attanasio), set sail again and they are likely to be joined by Alexia Barrier. Out of the twenty competitors that left Saint-Malo eight days ago, sixteen are therefore racing. Today, the twice winner of the Route du Rhum in the IMOCA class, Roland Jourdain, gives us his expert analysis of the 2018 race in the same category, as well as sending his thoughts out to Francis Joyon and François Gabart…

“It was a short night with the incredible show that Francis and François put on for us. I like both these sailors, although each of them has their own style. They had an amazing race. With the boat and the man himself, Francis is an example of sustainable development. That’s something that interests me, as I have been working on those matters alongside my ocean racing career.

As spectators, we are also being spoilt in the IMOCA class. There is a great line-up of foilers (from various generations) and non-foilers. It’s a fascinating contest to watch. We can more or less follow what is happening live with the tracker updated every hour. The problem is that it can take up your whole day.

“The leaders must be working flat out”

Looking at the trade winds on the weather charts from ashore always gives the impression that it is easy sailing. That is however far from being the case, as the wind is rarely stable in strength and direction. It is often very hot, which drains your energy. The point of sail the leading boats are currently in is far from simple. Alex Thomson, Paul Meilhat, Vincent Riou, Yann Eliès and indeed Boris Herrmann are sailing downwind trying to find the best VMG (Velocity Made Good, the perfect compromise between bearing and speed). This is a point of sail we don’t look forward to, particularly as you have to spend hours at the helm. Autopilots may be excellent, but they don’t offer their best performance in these conditions. You also have to plan gybes. The lads must be working flat out. Under gennaker, the boat stays on course more than under spinnaker downwind, where it can be quite scary. The rule is that the more sail you have up front, the worse you sleep. There are still a number of hurdles to avoid before the finish: the squalls as they approach the islands with all the seaweed, crab pots, and anything else that you cannot foresee in our line of work. You have to remain fully alert.

For the moment, Alex Thomson appears to be in control of the situation. It is true that he is unable to keep his opponents in the south and north in check at the same time. But when it is like that, you keep an eye on those that are closest, which in this case means Paul, Vincent and Yann. Alex has a strong lead, but he is going to feel the pressure on him from behind right up to the finish. As we saw with the Ultime boats, potentially everything can change. You really have to think twice before making any forecasts or saying what you think is going to happen.

The more miles Alex puts between himself and his rivals by the Tête à l’Anglais island (located to the north of Basse-Terre), the better it will be for him, as sailing downwind of Guadeloupe is like the famous Chinese water torture. In 2006, when I won in the IMOCA class for the first time, I had a lead of at least 120 miles over Jean Le Cam at Tête à l’Anglais island. But with the wind shadow from the main island and the trade winds disappearing, I found myself becalmed. The wind strengthened from behind, which allowed Jean to catch up. In the end, I reached Pointe-à-Pitre just twenty minutes before him. When I crossed the line, I could already see his mast lights arriving… This year, if the same thing happens to the IMOCAs that we saw with the Ultimes last night, our blood pressure will be rising to very high levels. Until the finish, there is going to be something to keep us enthralled in terms of who wins and who makes it to the podium.

“Wherever I look on the tracker, there are things to learn”

It’s no surprise that we find Alex, Paul, Vincent and Yann in front. They are after all the star pupils. We would have liked to have seen Charal up with them to compare the speeds.

The little group further back is logical too. It’s nice to see Alan Roura, Damien Seguin and Stéphane Le Diraison fighting it out. It’s interesting to compare three similar boats, remembering that Alan has added foils, unlike Damien and Stéphane. We’ll also see whether Arnaud Boissières with an updated boat will shine and catch them up. I don’t know Erik Nigon and Ari Huusela, so they’re a bit of surprise for me. It’s great to see them keeping up with the others like that. The wide range of backgrounds is one of the nice things about the IMOCA class.

Wherever you look on the tracker, there are battles going on and there is plenty to learn. It is hard even from ashore to be detached from the Route du Rhum. From time to time, I imagine myself out there with them. It really makes me want to be out there.”