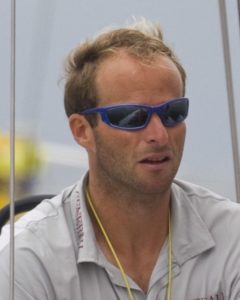 Alex Thomson continues to extend his lead in the trade winds. Now less than 1000 miles from the finish in Pointe-à-Pitre, the British skipper seems well placed, even if Paul Meilhat, Vincent Riou and Yann Eliès will remain a threat until the end, while Boris Herrmann is also lying in wait. The first boat to finish in the IMOCA class is expected in Guadeloupe on Thursday night (European time). More than 700 miles behind Thomson, we are also closely watching the fascinating contest between three Finot-Conq designed boats skippered by Stéphane Le Diraison, Alan Roura and Damien Seguin. Today’s expert analysis comes from Nicolas Lunven, who gives us his personal view on the exciting Route du Rhum in the IMOCA class.

“I’m surprised by the lead that Alex Thomson now has. Yesterday at noon, he was 105 miles ahead of the second-placed skipper. Today at the same time, the gap has been extended to more than 180. Paul Meilhat, Yann Eliès and Vincent Riou have had to carry out gybes under spinnaker, while Alex has been able to continue straight on. He is fast and increasing his lead, while getting well-placed strategically between the finish and his rivals. His position is looking increasingly comfortable.

“Alex Thomson has had the perfect race”

From the outset, Alex Thomson took up an attacking position with no compromises. He is well-known for being an attacker and that has been confirmed in this Route du Rhum. In theory, he still has an IMOCA which can more or less express her full potential. It’s not really a surprise finding him there. He is a very good sailor, has a fantastic boat aboard which he finished as runner-up in the Vendée Globe. For the moment, Alex has had the perfect race and we can be certain he will continue to attack until the end.

Until now, the leading skippers have experienced squalls, which can modify the wind considerably and over long periods. According to weather charts and satellite imagery, they look like entering an area that is drier with fewer clouds and probably more stable winds, even if there will always be disturbances. In theory, Alex should be getting the same sort of conditions as those chasing him, which is good news for him.

Paul Meilhat is sailing really well, which just goes to show that straight daggerboards are not yet ready to be pensioned off. I think that he is pushing hard. We can see that in his videos and audio links. Vincent Riou dropped off for a while after the middle of last week. He seems to be up and running again now, but hasn’t managed to be faster than Paul in conditions where he ought to have been. Yann Eliès has done well to get back in the game. By positioning himself further south, when he entered the trade winds, he must have picked up more wind. It’s interesting as these three sailors are aboard three different boat designs, and yet the gap between them remains tiny. They are having a great battle. Everyone has probably had to deal with technical hitches that we don’t know about for now, but will find out about at the finish. We can then look back on the race and better understand what has been going on.

“A final stretch that is like a coastal race”

At the end of the race, there is the lap around Guadeloupe, which can always upset everything, as we saw with the Ultimes. If Alex Thomson manages to keep his current lead, he should be able to complete that lap without any worries. Behind him, it is likely that Paul, Vincent and Yann will continue to battle it out like that until they reach the north of the island. The final stretch along the coast of Guadeloupe to determine the podium places will be just like a coastal race.

Watch out for Boris Herrmann, who is lying in wait. The four frontrunners need to avoid making any silly mistakes. Boris is having a great race for what is his first solo race in the IMOCA class. It is to his honour that he has managed to rival the leading group.

I am pleasantly surprised by Damien Seguin. I love what he is doing. We must not forget that he only has one hand and is doing remarkably well against Stéphane Le Diraison and Alan Roura, competitors who are sailing IMOCAS with similar potential. They are having a great fight between each other. When you see how difficult it is to sail an IMOCA alone, I’m amazed by Damien, who is doing so well in spite of his handicap. I raise my hat to him. He has already proven in Class40 that he is a very good ocean racer. In the IMOCA class, he is going to be one to keep an eye on in the future.

I’m a bit surprised that aboard a boat fitted with foils Arnaud Boissières isn’t up with the three boats ahead of him. Maybe he has some technical problems. I know Erik Nigon a bit as we sailed in the Figaro class together. He is having a nice Route du Rhum. It’s very ambitious to sail an IMOCA when you are not a professional.

Four competitors set sail again yesterday and are sailing in the Bay of Biscay. I don’t know if there was some sort of agreement between them, but it’s a pretty good idea to set off again together. It means you can push hard and can be motivated. Let’s not forget either that there is in any case the matter of qualifying for the Vendée Globe, training, making progress and preparing the boat.”