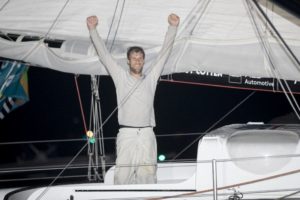 French solo skipper Paul Meilhat at the helm of SMA was crowned the unexpected winner of the IMOCA class in the 2018 Route du Rhum-Destination Guadeloupe solo transatlantic race today from Saint Malo in Brittany to Pointe-à-Pitre in Guadeloupe.

The 36-year-old French yachtsman from Lorient took the race win after benefitting from a 24-hour time penalty imposed on British sailor Alex Thomson who crossed the finish line first on Friday morning on Hugo Boss while holding a margin over Meilhat of more than 140 nautical miles.

However, the British sailor who had led the race almost from the start on November 4th, was penalised for using his engine to extricate himself from a rocky headland some 70 miles from the finish line of the 3,542-mile single-handed race which is staged every four years.

When Paris-born Meilhat crossed the finish line himself at 20:23:18 local time (01:23:18CET today) after enduring some frustrating calms on the west side of the Basse Terre island, he had been at sea for 12 days, 11 hours 23 minutes. More importantly he was some 11 hours and 48 minutes inside the British skipper’s total elapsed time, that included the 24-hour penalty.

This is the biggest career win for Meilhat who started in sailing in Laser and 49er dinghies and has previously won the Transat AG2R La Mondiale double-handed transatlantic race alongside Gwénolé Gahinet. He retired from the last Vendée Globe in 2016 while in third place in the southern Pacific and a year before that had to be rescued from his boat in mid-Atlantic after suffering serious rib and pelvic injures during a storm.

This win in the 11th edition of the Route du Rhum-Destination Guadeloupe comes at a timely moment, underlining Meilhat’s class just as his four-year relationship with SMA comes to an end as the French insurance company withdraws from sailing. It is a bitter irony that he will leave Guadeloupe with neither a boat nor a sponsor for the next Vendée Globe solo round-the-world race for which he would undoubtedly be a favourite, given the right machinery.

An emotional Meilhat told the French and international media assembled on the victory pontoon: “This is my first big win, I wanted to sail a good race as a reward for all the support I have had. This is payback. Before the start I knew what I could do and what I am capable of. And I wanted to profit from the course, to feel like I am moving forwards.”

Meilhat paid a warm tribute to Thomson whose error – failing to wake-up before Hugo Boss sailed into a rocky cliff under auto-pilot – handed him his first transatlantic solo race win. “I can’t believe this has happened,” he said. “Alex’s mishap leaves us chilled because we were all attacking so hard, like mad things. When we put ourselves in situations of extreme fatigue mistakes can be expensive. And in this case for the sake of 100 metres it could have been so much worse. I am just happy he is OK and the damage to his boat is not too bad.”

“I’m a big fan of Alex,” he added. “He’s sailing incredible races with the choices he makes, his speed, his style and he’s a great guy. What you need to remember is the talent he has. You have to absolutely remember what he did on the racecourse. He is the extraordinary character, whether he won or not. It’s really good to have guys like that with us on starting lines.”

Then Meilhat returned to his own future. “In 2019, ideally, I want to continue to progress towards my goal of being at the start of the Vendée Globe 2020. I am open to any proposal! Build a new boat, modify this one, everything is possible!”

Meilhat can take considerable satisfaction in having won this race with an IMOCA boat which is not a foiler, that is to say it has conventional straight daggerboards. Keeping two of France’s most experienced, talented solo racers behind him is no mean feat.

Yann Eliès who finished in second place behind him just over two hours later on UCAR-Saint-Michel and 2004 Vendée Globe-winner Vincent Riou, who is on course to be the next finisher on PRB, pressed Meilhat all the way across the Atlantic.

Indeed Eliès was fighting until the very last few miles to get past Meilhat as they sailed slowly along the west side of Basse Terre island which is blanketed from the easterly trade winds by the 1500-metre La Soufriere volcano.

From being 20 miles behind, Eliès was at one point less than three miles adrift. But it was not to be for Eliès who desperately wanted to win for the same reasons as Meilhat. He too is looking for a major sponsor to help him build a new boat for the Vendée Globe and will also lose the use of his current one as it is already sold.

“I am going back to Paris early, the time trial for the next Vendée begins with Paul,” Eliès explained. “We are in the same situation, we need sponsors. After this race, I hope that we both get that for 2020.”

Reflecting on the race, Eliès said: “I’m broken. The IMOCA demands a lot of crazy energy. You have to manage your time, your sleep, your strategy, your mind and your physical effort. These are dozens of tasks to negotiate a day, which make it difficult.

“This Route du Rhum-Destination Guadeloupe has been amazing. The first days, I thought I could forget the podium! I was in an area without wind on Monday 5th, I saw Paul and Vincent escape. When I pulled myself out, I was 80nm behind.”

“Alex Thomson executed his race masterfully,” he added. “To make a mistake is part of the game. He showed that he was the boss.”