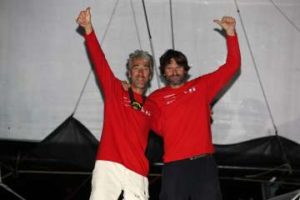 Gilles Lamiré and Antoine Carpentier on their 50ft trimaran, Groupe GCA – Mille et un sourires, have won the 14thedition of the Transat Jacques Vabre Normandie Le Havre after crossing the line in the Bay of All Saints in Salvador de Bahia on Friday, November 8, 2019 at 04:49:41 (UTC ), 11 days 16 hours 34 minutes and 41 seconds after leaving Le Havre, France on Sunday, October 27 at 12:15 (UTC)

As he was leaving Le Havre, Lamiré announced that he was here to win. Groupe GCA – Mille et un sourires was not the bookies favourite for the 14th Route du café. But by buying the old Crêpes Waouh 3, a 2009 VPLP plan with an exceptional track record, this year, the Saint-Malo skipper knew that he now had a boat that matched his ambitions. After six years on the Multi50 circuit, Antoine Carpentier, who is as calm as he is effective and had already pocketed the British Transat in 2016 joined as co-skipper. Already a winner in Salvador de Bahia in the Class40 two years ago, alongside Maxime Sorel, Antoine Carpentier is at ease racing on all platforms inshore or offshore.

After a cautious start from Le Havre, Lamiré and Carpentier were slower in the Channel, letting their competitors race ahead without being left too far behind. Their maximum deficit was 67 miles on October 30 before entering the anticyclonic ridge south of Gibraltar.

Taking advantage of a gap to the east of Solidaires In Peloton – ARSEP,which had until then had a faultless race, they found a more more direct trajectory that saved them many miles and without ever stalling. Hull-to-hull with Primonial, they took the lead on November 1, south of the Canaries, and have never given it up, increasing their advantage with each ranking.

Passing between the islands of Sao Vicente and Santo Antao in Cape Verde, they took advantage of the accelerating winds in the channel without suffering from the wind shadow of the large volcanic islands.

As for the Doldrums, they crossed them in less than 24 hours – a mere formality. Growing in confidence in their boat throughout this Route du café, Lamiré and Carpentier were able to accelerate when necessary and then maintain a high pace with very good averages in the trade winds.

Where others might have looked behind them and covered, this duo were always looking to the finish.

Routed by Christian Dumard, Lamiré and Carpentier had a great race, worthy of their champion trimaran, the most successful in the history of the Multi50 class. Groupe GCA – Mille et un souriresvictory in Salvador de Bahia is its sixth victory in a transatlantic race, including four Route du café.