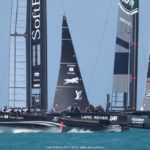 Sir Ben Ainslie was forced to explain a highly dramatic collision in the first day of the Louis Vuitton America’s Cup Qualifiers on Bermuda’s Great Sound.

Having already seen some thrilling and action-packed racing in the first five of the six races that were run on day one, particularly from ORACLE TEAM USA who claimed back-to-back wins, the drama really unfolded in the final race of the day between Land Rover BAR and SoftBank Team Japan.

In what proved the biggest flashpoint of the afternoon, both teams were looking for the advantage going into the start box, before the two boats collided at speed, resulting in a penalty being given to Sir Ben Ainslie and the British team. Damage was sustained to both boats, with the Olympic legend’s boat taking on water after the incident.

In scenes similar to the final week of practice racing, in which Land Rover BAR hit Emirates Team New Zealand, Ainslie again found himself having to defend his actions when questioned after racing.

“To be honest, to me it appeared six of one and half a dozen of the other,” said the Land Rover Bar helmsman, whose team suffered defeat in their second race of the day having enjoyed a morale-boosting win over Artemis Racing earlier in the day in race four.

“The collision was obviously unfortunate but these things happen when you are racing these boats.

“You don’t go out there intending to cause damage and so on that front it is was unfortunate to see both boats with damage.

“Unfortunately I’m not a boat builder so I’m not sure about the extent of the damage just yet, but no doubt both shore teams will be working incredibly hard to make sure we are both ready for tomorrow.

“However, for me it was fantastic just to see us competing and up to speed with all of the others. I believe we have silenced a lot of our doubters and I am just incredibly proud of all of our team.”

Meanwhile, SoftBank Team Japan helmsman Dean Barker, whose team suffered defeat to Artemis Racing in their first race of the day, bounced back with victory in race six and was relieved that none of his team had sustained any injuries in the collision with Land Rover BAR.

“We were incredibly lucky that there were no injuries sustained by the guys,” said the New Zealand native. “Maybe they were still in a bit of shock when we started racing but the way they regrouped and got back into things was fantastic.

“Ben has apologised. Clearly it was their mistake because they caused it but it doesn’t stop the guys in the shore team having to have a big workload tonight to put things right.

“You know what is about to happen. You can see it coming in slow motion but there is nothing you can do to stop it.

“The first race against Artemis Racing was disappointing. We had good pace and obviously tried hard to keep ahead but ultimately we couldn’t.

“However, what was pleasing was how we bounced back and got that victory in the final race.”

Meanwhile, it proved a highly positive day for the Defenders of the ‘Auld Mug’, ORACLE TEAM USA, who comfortably beat Groupama Team France in the opening race of the afternoon, before coming from behind to overcome Emirates Team New Zealand in what proved the highlight race of the day.

However, despite seeing ORACLE TEAM USA sit joint top of the Louis Vuitton America’s Cup Qualifiers standings with three points, alongside Land Rover BAR, skipper Jimmy Spithill was left far from content as he refused to rest on his laurels ahead of day two tomorrow.

“The lads aren’t happy tonight. We can definitely sharpen up a lot ahead of tomorrow,” said the two-time America’s Cup winner.

“Of course it is good to end the first day with two wins from two races but we have got to sharpen up on what we do out there.

“Consistency is the key in a competition like this and so there is a lot for us to improve on.

“However, as I said, it is pleasing that we managed to finish this first day of competition and come away with two race wins.”

Another helmsman who was left with mixed feelings was Artemis Racing’s Nathan Outteridge, having seen his side claim a victory against SoftBank Team Japan, before somewhat surprisingly losing out to Land Rover BAR in race 4.

“Our first race we started slowly but you could see how hard we pushed to get back into the race and when the opportunity came, we took full advantage.

“The second race against Land Rover BAR, we just didn’t get any opportunity to pass them. It was disappointing to lose the race but we will look at ourselves and see what we can do to improve.

“However to get that first win on the board is really important. We had some strong performances in practice racing and so it was great to be able to bring that forward to today and get a first point banked.

“It was also pleasing to win in in the manner in which we did. We kept chipping away, put pressure on SoftBank Team Japan, and then, to get something, that feeling was really good.”

Emirates Team New Zealand helmsman Peter Burling was left satisfied with his team’s showing on the first day, having also taken one win from the day, overcoming Groupama Team France, before losing out to ORACLE TEAM USA in their second race of the day.

“It is really great for us to have got a win on the board,” said the youngest helmsman competing.

“Having taken that win, we always knew it was going to be tough taking on ORACLE TEAM USA. We put up a strong challenge and matched them throughout the race but they just edged us in the end.

“Having lost it late on was a little frustrating but I’m really happy with our first day on the water.

“We’re now excited to get back into action tomorrow and no doubt we’ll be racing hard again.”

Meanwhile, it proved a difficult day for Groupama Team France, who suffered defeats in both their encounters, losing to both ORACLE TEAM USA and Emirates Team New Zealand.

However, having faced two of the highly-fancied teams on the first day, helmsman Franck Cammas is remaining hopeful of an improved showing from the French team in the days to come.

“Today to have our first two matches against teams like ORACLE TEAM USA and Emirates Team New Zealand was a hard way to start the America’s Cup,” said Cammas.

“We knew those teams were among the best teams but we wanted to be closer to them than we were in the end.

“We have to work hard and try and understand why we weren’t fast today. We also need some big improvements in the maneuvers and so there is a lot to work on for us.

“We will try for sure to improve as quickly as possible. Every day is different and so we will see what tomorrow brings.”