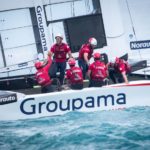 Six races were scheduled and the day started perfectly for Groupama Team France who clinched their first win of the Louis Vuitton America’s Cup Qualifiers with a thrilling and morale-boosting three second victory over Artemis Racing in the first race of the day, race 7 of Round Robin 1

Having suffered back-to-back defeats on the opening day of the competition, Franck Cammas’ team enjoyed the sweet taste of victory with a vastly improved performance over the hotly tipped Swedes.
Getting out of the start box ahead, the French team then looked to have thrown away their advantage, following a poor manoeuvre in the second leg which gifted the Swedish team the lead. However, refusing to let their heads drop, Groupama Team France responded in spectacular fashion, foiling smoothly to gain a 22 second lead at gate 3, then staying ahead at the next two gates.
However, a nosedive by the French team in the penultimate leg lead to a nervy conclusion as both teams raced for the finish line. However, despite Nathan Outteridge’s team chasing down their French rivals, Groupama Team France kept their nerve and clinched an impressive victory.

“It is a very good feeling for the whole team, we have been waiting two years for that feeling,” said Franck Cammas after his team’s victory in their only race of the day.
Race 8 proved an intriguing battle between former teammates Jimmy Spithill and Sir Ben Ainslie as ORACLE TEAM USA sealed a third successive win by beating Land Rover BAR.
It was the British team who started the stronger. Seizing the advantage out of the start box, they stayed ahead of their rivals until gate 3 when a big nosedive after the turn proved the decisive moment of the race, allowing ORACLE TEAM USA to seizing the advantage.

It was a costly mistake that Land Rover BAR failed to recover from and the American team built up a 32 second lead by Gate 5 before heading home to cross the line 39 seconds ahead of their British rivals.
“We saw today how the conditions can make it easy to make mistakes out there,” said ORACLE TEAM USA helmsman Jimmy Spithill, who wasn’t completely content despite claiming two victories from three races.

“We made too many mistakes really and you could see throughout the day that it’s about who could get off the line the quickest and get around with the least amount of mistakes.
“We set pretty high standards so we’re not satisfied. We’ll take the lessons we’ve learnt and move forward.”
Meanwhile, Land Rover BAR helmsman Sir Ben Ainslie took the opportunity to praise his shore team for getting Rita to the start line after their collision with SoftBank Team Japan on the opening day.
“It was an incredible effort from the shore team who worked tirelessly through the night to repair the damage and get us ready for today,” said Ainslie whose team suffered back-to-back defeats on day two.

“It is just a shame we couldn’t repay them in the races today. We just didn’t get it right and made too many mistakes but we’ll learn from it and move on.
“We’ll look at doing a bit more work on the boat tonight but I don’t think the damage affected our performance too much at all.”
Having endured mixed fortunes on the opening day, in which they won one race and lost the other, Emirates Team New Zealand started day two in spectacular fashion with a high-quality display to beat SoftBank Team Japan by 33 seconds in race 9.
However, they did not have it all their own way as they had to battle back from behind against Dean Barker’s team as SoftBank Team Japan gained the better momentum out of the start box, leading going into mark 1.

The Japanese team lost some of that momentum with a nosedive going into the third gate but they managed to recover brilliantly to build a 13 second advantage at gate 4.
However, the tides turned on the fifth leg, as Emirates Team New Zealand demonstrated the full speed of their pedal-powered grinding systems. Tacking and jibing incredibly smoothly, the Kiwis chased down their rivals before overhauling them heading for gate 5.
In the latter stages of the race they found themselves 11 seconds ahead, before racing for the finish line to claim a second victory in the Louis Vuitton America’s Cup Qualifiers.
The variable winds over the Great Sound racecourse came to the fore in race 10, as Artemis Racing prevailed in a topsy-turvy battle against ORACLE TEAM USA.
Having suffered a somewhat shock defeat to Groupama Team France in the first race of the day, the Swedish team enjoyed a flying start and maintained a healthy lead for the first three gates.
However, from leg five, the unpredictable nature of the conditions played a major role in the remainder of the race and the lead switched hands multiple times between the two teams.
But by the sixth and final gate, Artemis Racing enjoyed the advantage in the changing conditions finding themselves ahead before racing for the line and taking a welcome 39-second win.
“Today showed just how hard racing can be out there,” said Artemis Racing helmsman Nathan Outteridge.
“We had too many mistakes against the French team in our first race and made life hard for ourselves.

“However, I’m extremely proud of the way the whole team regrouped from that defeat and fixed everything in an almost perfect race against ORACLE TEAM USA.”
Emirates Team New Zealand again demonstrated their speed in race 11, as they sealed a second successive victory on the day, brushing aside Land Rover BAR in devastating fashion.
The race had the worst possible start for helmsman Peter Burling, as the Kiwis were handed a penalty in the pre-start after they crossed the racecourse boundary mark. However, despite the lapse in concentration and having to start two boat lengths behind the British team, the incident didn’t prove disastrous as they bounced back spectacularly.
Cutting the deficit by just the second leg, Emirates Team New Zealand breezed past Land Rover BAR and were ahead by nine seconds at the third gate.
Sir Ben Ainslie’s team continued to struggle for pace and had no answer for the Kiwis’ speed as their lead reached 49 seconds by Gate 4.
Refusing to rest on their laurels, Emirates Team New Zealand eased over the finish line, one minute and 28 seconds ahead of Land Rover BAR to cap an impressive day on the water.
“We had a few tiny issues onboard and I misjudged the entry, but that happens,” said Burling on his pre-start error which led to a penalty.
“However, I see it as good practice on how how to shake off a mistake and show how fast you can be when chasing.
“Obviously starting from behind is not ideal but overall I think we’re all happy with today’s results.”
Having suffered their first defeat of the Louis Vuitton America’s Cup Qualifiers earlier in the day, ORACLE TEAM USA responded brilliantly in the twelfth and final race of the afternoon, cruising to a comfortable win over SoftBank Team Japan.

Leading from the outset, Jimmy Spithill’s team controlled the race, maintaining a healthy lead throughout proceedings, before eventually crossing the finish line 54 seconds ahead of their rivals, capping off the day’s action in sensational style.

“We had a tough day out there today,” conceded SoftBank Team Japan helmsman Dean Barker.

“The boat seemed quick and I think we sailed okay but we got caught out by some needless mistakes which we need to address.
“We’ll look at those areas closely and come back fighting tomorrow.”