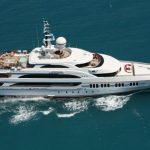 On October 8, 2005, Benetti launched AMBROSIA III. Due to be delivered in early 2006, this uniquely innovative yacht has been designed for her owners to cruise around the world.

By volume and tonnage the largest yacht launched to date at the Benetti  Shipyard, Ambrosia III is also the most technologically advanced in the  company’s history. The 65-meter yacht features diesel-electric Azipod propulsion which brings to yachting a level of fuel-efficiency, safety and quiet, flexible operation previously seen only in commercial and military ships. Ambrosia III also offers anchorless dynamic positioning, infra-red navigation and one of the most extensive entertainment and  communications systems ever installed on a yacht. The yacht profile has been designed by highly regarded Italian Stefano Natucci, in cooperation with the shipyard’s design office. The yacht’s interior, by renowned French designer Francois Zuretti, incorporates a highly refined Art Deco-themed interior with extensive use of marquetry, hand-cut carpets, elegant staircases and hand-painted murals.

The launch party gathered 500 guests in the Benetti Darsena facility. This event was very special not only for the owner and his family but for the shipyard’s employees and the local people: this was the last launch of a Benetti steel yacht in Viareggio, since the construction of large yachts has now been transferred to Benetti Livorno.

The range of Benetti on NauticNews