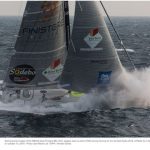 Jean Le Cam added to his reputation as one of the most renowned and popular skippers in the history of the Vendée Globe when the 57 year old veteran of four consecutive editions finished in sixth place today off Les Sables d’Olonne.

After struggling to find funding, under the strapline ‘Yes We Cam’ his nationwide initiative secured a late funding package, a mix of crowd funding and sponsorships which ensured he could compete in this eighth edition of the solo non stop round the world race. ‘King Jean’ as he became known when he won La Solitaire du Figaro three times, will be remembered in this race for his incredible duel with Yann Eliès which has rumbled on since they came together early in the Pacific. His familiar unique style of video and his particular turn of phrase have long since become part of the Vendée Globe lore.

Finishing his fourth attempt at the Vendée Globe at 1643hrs UTC, Jean Le Cam just missed out on the symbolic 80 days, finishing in 80 days 4 hours 41 minutes and 54 seconds, just behind fourth placed Jean-Pierre Dick and fifth placed Yann Eliès. He sailed 27,141 miles at an average speed of 14.1 knots. It is the third time that the Breton sailor from Port-La-Forêt has crossed the finish in the Vendée Globe his best being second place in 2004-2005 and fifth in 2012-2013. In 2008-9 he capsized 200 miles west of Cape Horn and was rescued by Vincent Riou.

In spite of his amazing list of successes, Jean Le Cam was far from certain of being able to take part, as he found it hard to find sponsors. Thanks in part to a crowdfunding campaign, he was finally able to line up at the start on 6th November. With his Finistère Mer Vent, the Farr designed boat that Michel Desjoyeaux sailed to victory in the 2008-2009 race and which Le Cam won the Barcelona World Race with Bernard Stamm in 2015, he has once again proven a wily, solid competitor whose experience on the race course is second to none in the fleet. In Les Sables d’Olonne before the start he said. “On paper, I should be in the top ten or twelve. I think there will probably be five ahead of me, so I could be in the top six or seven…”

While he got off to a steady, unspectacular start, Jean Le Cam kept pushing hard. By the third day of the race, he was already engaged in a duel with Yann Eliès. If the start was difficult, Le Cam had his own solution to feel better. “I’m having a big meal today. Beef and carrots, Haribo sweets, meat paste. And I even found some butter.” Yann Eliès made his getaway, while Jean was doing battle with Jean-Pierre Dick and Thomas Ruyant. Meanwhile, his record to the Equator dating back to 2004 was smashed by Alex Thomson (Hugo Boss) after 9 days, 7 hours and 2 minutes of sailing, which meant the British skipper shaved one day and four hours off Le Cam’s record.

On the fifteenth day of racing, Le Cam started a trend he would continue throughout the race. In his videos he would move the camera around saying, “Clack, clack, clack.” On social media, the slogan became even more famous than his “Yes We Cam.”

Le Cam rounded Cape Horn after 23 days, 10 hours and 21 minutes. The Indian Ocean had its highs and low points. There was some pleasant weather, but then it turned very nasty with winds reaching sixty knots. He crossed the longitude of Cape Leeuwin after 34 days 7 hours and 28 minutes. On 12th December, off Tasmania, Jean Le Cam had to weather the storm. He slowed down to let a deep low go by with winds forecast to be around sixty knots. It was impossible to avoid it completely, so Jean stayed to the south close to the edge of the Antarctic Exclusion Zone. This proved to be a good option, as he got back up with his close rivals (Dick and Eliès). Once the storm was behind him, Finistère Mer Vent faced the mighty Pacific. “Firmin, please don’t take that wave! Firmin is good, but sometimes she does what she wants. I find it hard to get the staff at the moment,” joked Le Cam in his idiosyncratic style, talking about his autopilot which he name Firmin. He had Christmas in the Pacific and rounded the Horn a week later. “This is the only mechanical sport, where 80% of the time, the pilot looks behind him. We look at the helm and the waves. It’s quite surprising. But there are times when it’s not much fun looking ahead.”

His sixth Cape Horn
Yann Eliès and Jean Le Cam became inseparable for the rest of the race regularly changing places with each other. They even sailed within sight of each other and chatted on the VHF. Jean Le Cam rounded Cape Horn for the sixth time: four times in the Vendée Globe (2004-2005, 2008-2009, 2012-2013 and 2016-2017), once in the double-handed Barcelona World Race (2014-2015) and once in the crewed Whitbread with Eric Tabarly.

After two months of racing, Yann Eliès was only a dozen miles ahead. After this length of time at sea, most skippers are fed up with their freeze-dried food. But that was not a problem for Le Cam “Freeze-dried stuff is for lazy people, who don’t want to do any stacking. My food comes to 60kg, freeze-dried to 30kg. So to save thirty kilos, they eat crap food.” Last week, Le Cam talked about his duel with Quéguiner-Leucémie Espoir. ”I’ve been hanging out with Yann since Tasmania, which means we have spent more than half the trip together! It’s a story within the big story.”