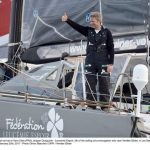 Jean Pierre Dick crossed the finish line at 13:47:45hrs UTC to secure fourth place for the second consecutive time. Yann Eliès exorcised the ghosts of his horrific 2008-9 accident when he broke the finish line at the Nouch Buoy to complete the Vendée Globe for the first time at 15:13:09hrs UTC, one hour and 25 minutes after Dick. In fifth place Eliès’ Quéguiner-Leucemie Espoir is the first IMOCA configured with straight daggerboards as opposed to the new generation foils. One hour and 30 minutes later, at 16:43:54hrs Jean Le Cam brought his Finistère Mer Vent across the finish line to take sixth place.

The trio were largely compressed together by a big storm to the south of Australia. Dick routed over 400 miles to the north to pass through the Bass Strait, the first Vendée Globe skipper ever to route north of Tasmania in order to avoid the worst of the violent weather. Meanwhile Eliès and Le Cam slowed and rode out the worst of the weather in the south of the system, Eliès spending more than 24 hours hove to in gale force winds. On his foil assisted latest generation St Michel-Virbac, Dick was able to build his lead again but was caught each time in calms. Eliès and Le Cam spent long periods racing in close proximity to each other. Suspense held right into the final hours of their race. Dick’s lead of 70 miles last night was cut to seven at one point before he was able to extend away when the breeze finally build again for him this morning.

Dick admitted that although he was disappointed to have missed his target, a place on the podium, he was satisfied to have held off the attacks of the two highly experienced and successful French skippers, Eliès and Le Cam, both three times winners of La Solitaire du Figaro, the one design solo offshore stage race which remains the proving and training ground for French ocean racers. Indeed, for his tenacity in fending off Le Cam and himself, both three times winners of La Solitaire du Figaro, Yann Eliès decreed JP Dick an ‘honorary Figariste’ when they shared the same stage this afternoon. “It was good in our race within the race, competing against such incredible skippers as Yann and Jean with a lot of experience and it gives me a good feeling to finish ahead of them. The podium was my target and so to miss out is disappointing,” admitted Dick. “There were a lot of calms and a lot of comebacks. It was good for spectators but hard for me.”

Dick’s St Michel Virbac IMOCA spent last winter being structurally reinforced after problems forced him out of last autumn’s Transat Jacques Vabre, the new boat’s maiden race. The skipper who originates from Nice pointed to his lack of time on his boat, not knowing the fine detail of how to trim and set up his boat in the first weeks of the race, as the root cause of his initial losses to the top five boats. “I am happy to get back. I enjoy being at sea. But I missed the knowledge of the boat, the small details, I missed the keys to the boat in the first weeks and that was hard psychologically. To lose 500 miles was hard psychologically. I felt like I was missing little things like how to set up and trim the boat, the finesse. But I had a good climb back up the Atlantic to start with.”

Eliès was objective, admitting that he thought memories of his 2008-9 accident and rescue would not really affect him as much as they did. “I watched Jérémie Beyou’s press conference and was very moved by what he said. It didn’t really surprise me because we’re so close out on the water and in life. I may well have said that the accident wasn’t a problem, but I realised in the first few hours that it was affecting me. I found it hard to settle into the race. It was hard leaving the family behind. I hadn’t realised it was going to be so hard. Then I started to have a few technical problems with my sails. Gradually I overcame the problems and managed to exorcise that moment from my life. This Vendée Globe resembled how I imagined it with my team and sponsors – a reasonable approach. Eighty days is long, so finding myself in a battle with Jean-Pierre and Jean kept me busy. I preferred the 52 and 60-day Jules Verne attempts as 80 days is so long. Next time I’ll go on a foiler! I was a bit when JP went through the Bass Strait and I got my fingers burned. I told myself a little bit more wind and I would really have been in a mess and not be able to bring the boat home safely.”